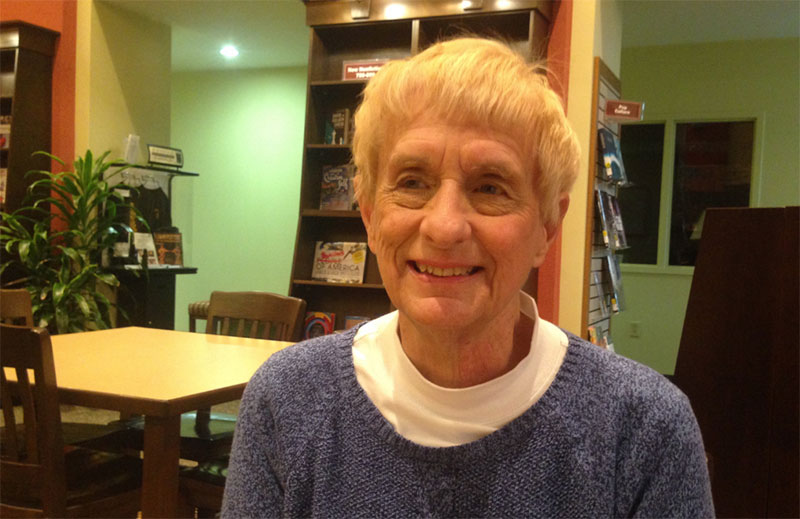 Since 1985, North Coast Education Services has worked with thousands of tutors, students and families. Some relationships last a school year or a summer. But there are some tutoring situations that surpass time. We’re proud to share the story of Gretchen Jaeger, a long-term tutor and her student. We’re using pseudonyms for the student (Jennifer) and her mother (Linda) because the family would prefer to be anonymous.

For years, Jennifer struggled in classes. With a low IQ of 80, she is a slow learner but managed to graduate from high school. In addition to hearing problems, Jennifer copes with dyslexia. Frustrated, Jennifer wanted to do more with her life. But the dyslexia seemed to hold her hostage. As a young adult, she took a job she could handle: cleaning hotel rooms. That’s when Linda contacted NCES and was introduced to Gretchen.

One spring day in 1992, Linda sat nervously in a Westlake, Ohio church as she waited to find out whether tutor Gretchen Jaeger could help Jennifer, Linda’s 18-year-old daughter.

After introducing herself to Jennifer in a church classroom, Gretchen spent the next 45 minutes assessing Jennifer’s reading and writing challenges. Gretchen listened as Jennifer sounded out words.

When she was done, Gretchen walked over to Linda who started sobbing as Gretchen said what she had so long hoped to hear.

“I can teach her to read.” Gretchen has faithfully met with Jennifer 1,300 times since that day – once a week for 25 years.

At first, their tutor-student relationship was all about improving her capacity to read. Jennifer quickly reached a basic elementary reading level and today can read as well as sixth graders. They started with simple sentences, stories and phonics through Richards Learning Systems®.

Over the years, Gretchen became much more than a tutor. She filled gaps that Jennifer needed as she evolved from a teenager to an accomplished adult. With each job, Gretchen has assisted Jennifer with job applications, certification courses and employee evaluation. When Jennifer wanted to get a driver’s license, Gretchen supported her on the written test.

Jennifer’s career in health care took off after Gretchen gave her an opportunity to unlock her dreams. In her mind, Jennifer wanted to help others, especially the elderly. Gretchen knew about Jennifer’s work ethic as a hotel housekeeper.

“You’re better than that. What would you like to do?”

Jennifer had her chance and didn’t hesitate. Her dream rushed out and bravely stood on the doorstep of reality: “I would like to be an activities person at a nursing home.”

“I coached her on how to deal with people,” Gretchen says.

They frequently met at a library where Jennifer also checked out magazines that she could read on her own. She took them to work and read articles to residents. Today, Jennifer works in a group home with men who suffer from Alzheimer’s. Her position requires that she document what they do each hour. Keeping a log isn’t easy. With dyslexia, writing has been difficult much like reading.

“Jennifer is pretty amazing,” Gretchen says. “She is very compassionate and sensitive as she works with people with disabilities.”

Gretchen has tutored hundreds of children and adults. Her passion for tutoring emerged deep into her education career that included teaching in public schools. In 1971, she earned a Bachelor of Arts degree in English at Baldwin Wallace College and became certified to teach English in high school.

One of Gretchen’s friends introduced her to NCES President Carole Richards in 1990. She got her first tutoring assignment within the next week.

“Gretchen brought out the best in Jennifer, and helped both Jennifer and her mother believe she could learn,” Carole says.

Jennifer is successful at her job because Gretchen continually builds Jennifer’s self-confidence and regularly helps her solve problems so she can improve her performance, Carole says.

Gretchen, who was often a substitute teacher in schools, prefers the NCES one-on-one tutoring and small classroom settings. Typically, she tutors in the evenings from 5 p.m. to 10 p.m.

“If they make a mistake or mess up, I can correct the situation without putting them down,” Gretchen says. “I have an enthusiastic, supportive, loving attitude with each student.”

She quickly diverts students from an error, saying something like, “Let’s just move this sentence around.” Gretchen also reminds younger students not to make fun of others.

Carole says Gretchen “lights up like a candle” when she meets with her students. “She is smart, nurturing, and caring. She provides the positive reinforcement that many students need,” Carole says. “Gretchen is skilled at developing her students’ academic skills. She is so positive and makes students believe they can learn.”

Gretchen’s motivation to help is rooted in her faith in God and a desire to make a difference in the lives of others.

“Tutoring has been a great opportunity to do that,” she says. “I pray that a student’s entire being isn’t their learning problem. I see their entire being as a child of God.”

Her tutoring sessions with Jennifer don’t have an end date. In fact, retirement apparently isn’t even in Gretchen’s vocabulary.

She’s also ever mindful of something Jennifer told her years ago: “You and I will be together the rest of our lives.”