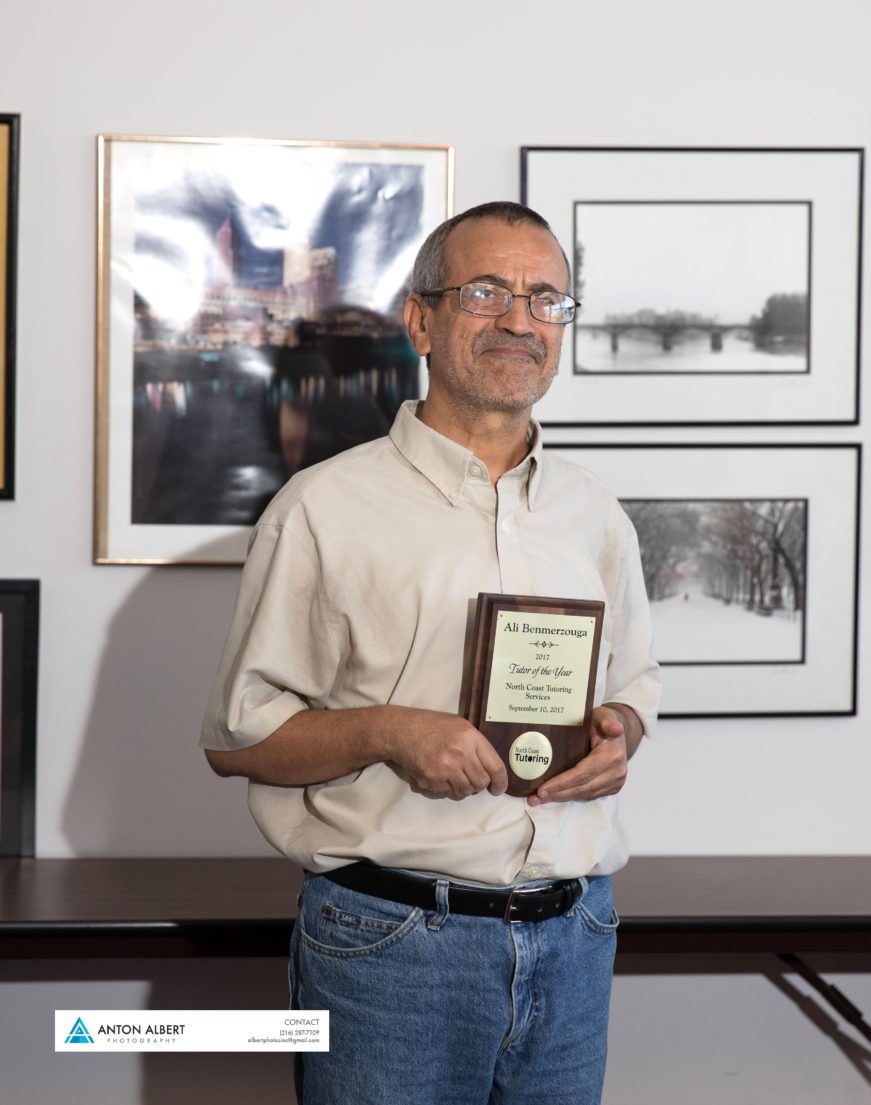 On September 10, 2017, Dr. Ali Benmerzouga was presented with the NCES Tutor of the Year Award.  This annual award recognizes one of our tutors for going above and beyond the call of duty to serve their students.  Ali, who is legally blind in both eyes, has developed clever ways to tutoring his students in advanced subjects, including calculus.

The Solon Times featured the following article on the front page of their paper on September 14, 2017, along with the photo below: 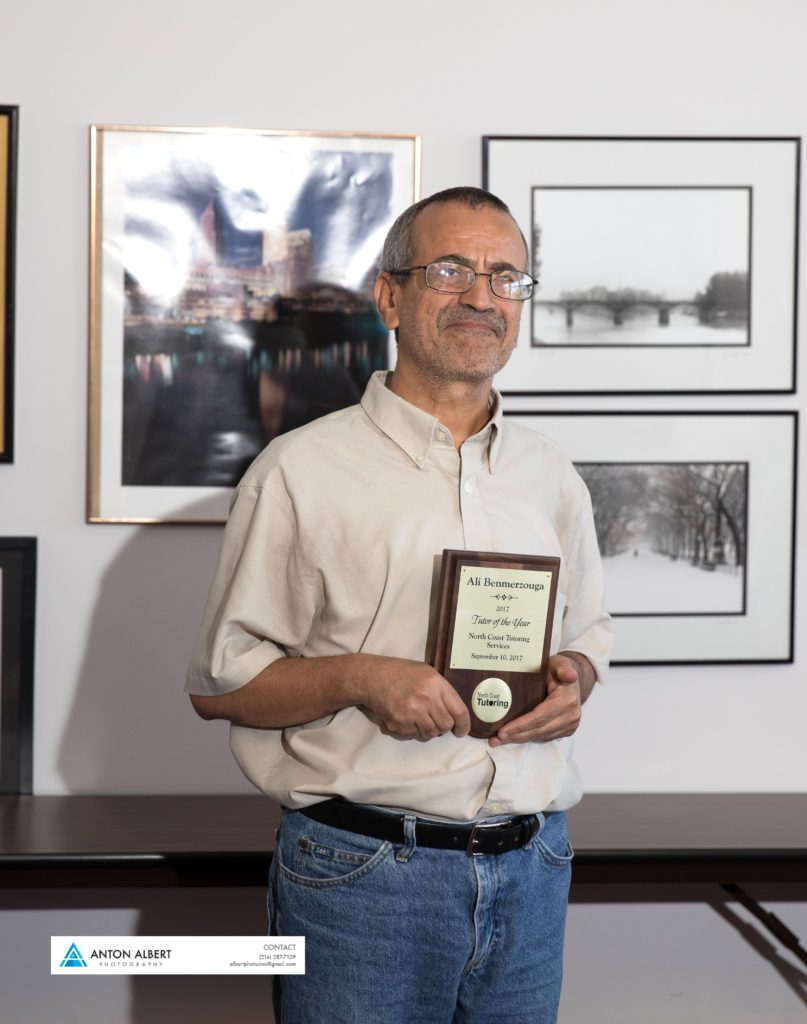 North Coast Education tutor Dr. Ali Benmerzouga lost sight in both his eyes in 2012 at the age of 54.

At 59-years-old, North Coast Education Service’s Tutor of the Year in Solon has an approach unique on many fronts.

For example, Ali Benmerzouga, an expert in math and statistics, has been known to Facetime with his students as a means to communicate and get a lesson across. In addition, he does most of his work when he tutors by talking, not writing, having the students explain each and every problem out loud – as well as their answers.

That is because Dr. Benmerzouga is legally blind, a disability that he has conquered over the last five years.

It was in September of 2012, at the age of 54 that Dr. Benmerzouga, a native of Algeria, lost sight in both his eyes. He had lost his left eye in June of 1998, due to retinal detachment, but his vision continued to worsen after that.

He underwent a combination cataract and retina surgery on his “good eye,” he explained, and unfortunately, it was not effective.

Dr. Benmerzouga, who holds two master’s degrees and a doctorate in operations research from Case Western Reserve University, went from an active life of academia and exercise, including jogging, swimming and basketball, to a world that was suddenly dark, he explained.

“It was really hard,” he said. “Imagine going from that type of life to a dark situation.

“You are just by yourself and you feel like you are in a dark room and cannot move anywhere,” said Dr. Benmerzouga, a former teacher at Cleveland State University’s Monte Ahuja College of Business.

Luckily, family and friends offered support. But the biggest gift in helping him adapt to the world of blindness was a referral from his doctor to the Cleveland Sight Center, he said.

“They were great, and so helpful and friendly.”

Not only did they assist Dr. Benmerzouga with mobility, orientation and independent living, they helped him learn Braille and connected him to the Hadley Institute for the Blind in Chicago, where he learned computer skills adapted for his disability.

The father of seven children learned special programming and how to use a keyboard. The computer skills he learned through the Cleveland Sight Center were then enhanced at Hadley, he said.

He brought those skills to North Coast Education Services, which provides tutoring services to children through college and employs 300 tutors, in May of 2016.

“He has done a wonderful job with clients and explains things in a way that students understand,” Mr. Kusik said. “We are all motivated and inspired by his ability to overcome his difficulties.”

Dr. Benmerzouga, who walks with a white cane and gets a ride to work by a family member or takes the bus, was honored last Sunday at North Coast as its tutor of the year during a picnic held at the Solon Road facility.

He said most fulfilling about his position at North Coast is trying to help someone go through his or her problems and helping students learn a particular lesson they may be struggling with.

“I feel so happy when they get the message, get the concept and know how to use it,” he said.

A resident of North Olmsted, Dr. Benmerzouga came to the United States in 1982. He currently is looking for additional employment with help from the Opportunities for Ohioans With Disabilities Group.

“I’m trying to find another job (in addition to North Coast) to use my expertise,” he said.

Click here to learn more about our tutors and to see our complete list of Tutor of the Year Award recipients.