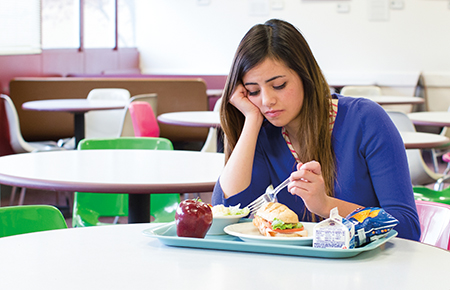 Some people are born social butterflies, while others prefer the solidarity of a smaller company.  When faced with speaking to new people, many adults do not know how to handle the situation, let alone children.  Last week, the Cleveland Metropolitan School District took a stand to help end social anxiety.

On February 13, the students of Wilbur Wright Middle School participated in National No One Eats Alone Day.  This relatively young program encourages students in middle school to branch out and sit with different students during lunchtime.  The goal of the program is to encourage conversation and foster a sense of inclusion and acceptance.  There is a link between social anxiety and many other teenage problems, such as bullying, violence, depression, and suicide.  By encouraging students to interact with other peers, the program hopes to significantly reduce social anxiety and instill a sense of value in teens.

Here is a video that was taken on National No One Eats Alone Day, posted online by the Cleveland Metropolitan School District.  We were directed to it by our good friends at CoolCleveland.1

No One Eats Alone Day was created by a group called Beyond Differences.  The non-profit organization was founded in memory of Lili Rachel Smith, a high school student who passed away in 2009 from medical complications.  Lili felt isolated in high school, something her classmates were unaware of.  Lili’s parents, with help of their daughter’s classmates, created Beyond Differences to end social anxiety among teenagers.

The small non-profit is primarily run by teens for teens.  The students believe that they must be the change they wish to see in the world and are focused on empowering teens to stand up for themselves and others.  Under the advice and directions of adult consultants, staff, and many supporters, the California-based group has received national attention with programs like No One Eats Alone.  Their other programs are a Teen Board of Directors, the Middle School Advisory Program, and their Leadership Academy Training Program.  All program participants are full-time middle school and high school students.

This video from Beyond Differences called “Be the One” introduces you to both the organization and No One Eats Alone Day.  It is quite an emotional piece that nearly brought me to tears, so keep some tissues handy.2

Schools are encouraged to hold No One Eats Alone days throughout the year.  (In fact, Wilbur Wright Middle School plans to make it a monthly event.)  The event is simple to run and completely cost-free to the schools.  More information on hosting an event is available on their website – www.nooneeatsalone.org.  There are also some wonderful resources for students, schools, and parents online at www.beyonddifferences.org.

It is so refreshing to see students taking a stand to help their peers.  I remember experiencing social anxiety in school as far back as the first grade – often sitting alone and feeling too scared to talk with my classmates for fear of rejection.  It can be a stressful situation and while I know my story had a happy ending, I know others are not nearly as lucky.  I am so touched by Beyond Differences and what they are doing for our society.  Someone has to take a stand…and who better to stand up for kids than kids?